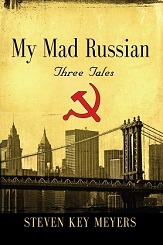 The story of My Mad Russian harks back to the 1930s when Walter Rosen and Lucie Rosen sponsored Dr. Lev Theremin and his remarkable electronic instrument, on which Mrs. Rosen became the best known amateur, touring North America and Europe. I came to know the storyincluding Theremins subsequent mysterious fatewhen I had the extraordinary good fortune to be hired at the age of 17 as underbutler at Caramoor, the Rosens great country estate in Katonah, New York most famous for its music festival. The long-widowed Mrs. Lucie Bigelow Dodge Rosen had died a year earlier, but her house was permeated still with her presence and that of her husband, and their faithful retainers, Martha Coyle Clark and Robert Clark, my supervisors, spoke of them endlessly. My memoir I Remember Caramoor captures this period, I hope charmingly.

My plot is fancifulentirely made up; I was assured that Mrs. Rosen was faithful to her husband. Contributing to the story, along with the legends and anecdotes I heard, was my reading of Mr. Rosen's business correspondence.

It amuses me to begin the story proper at the famous 1913 Armory Show, partly because one of its organizers, Mabel Dodge, later Mabel Dodge Luhan, was a friend of my grandmothers in Santa Fe. To this day my father remembers the abject terror of being presented to Mrs. Luhan as a very little boy.

The books unusual structure was suggested by how central to their identities their collection and estate seem to have been to the Rosens; it seemed right to me to trace over the course of many years the conception of, collecting for and building of their country house. The opening chapter might be an unconscious take-off on Jack Bennys famous punchline: Im thinking, Im thinking. If so, the influence is direct: I watched Bennys TV show, convulsed, from the age of five.

The Tesla connection arises from whatever it was that Mrs. Rosens mother, Flora Bigelow Dodge Guest, did or did not have going with the eccentric inventor. The account of Hitler's addressing a railroad station crowd came from Franklin Folsom; "Dank" told me he was waiting, a young Rhodes scholar, for a train in a Bavarian village about 1931 when that up-and-comer Hitler was driven in to address a gathering. Col. Dead Eyes was suggested by a uniformed Russian military officer who happened to receive a guided tour of Frank Philips fabulous Woolaroc Museum in Bartlesville, Oklahoma at the same time my uncle and I were going through it. Col. Dead Eyesa diminutive man with the coldest eyes I have ever seenwas not in the least interested in the American Indian rarities shown him, in fact absolutely impassive until he reached the final roomthe gun roomwhere Colt revolvers of every description stud the walls and a Gatling gun shiny as a toy sits in the center of the floor. Suddenly Col. Dead Eyes was a boy again! He beamed and grinned, crouching beside it to have his picture taken.

In broad outlines, the story of Anothers Fool was inspired by Mrs. Lucie Rosens hiring someone from the Sol Hurok Organization in the early 1950s to establish her Caramoor Festival. But thats it; its events and characters are made up. Unfortunately, I never met Hurok and dont recall that he visited Caramoor in my time, or even that I heard any stories about him, which is a shame as clearly he was one of the most interesting men in the country during the Cold War, in a unique position to bridge the U.S. and his native Russia.

Though Anothers Fool is, I hope, well-crafted entertainment, its origin was serious: In contemplating a failed relationship, I thought it might prove illuminating to write it from the point of view not my own. It also got a serious, steady push from the passage of Shakespeare's Troilus and Cressida that suggested itself as the epigraph.

Bruces persecution by police and the FBI was suggested by the 1950s witchhunts of gay people, operations whose real harm is too easily forgotten. I knew a victim, a colleague at the white-shoe Wall Street law firm where I put in several years proofreading who had been fired from the State Department years earlier because he was gay (his intellect and culture impressed me when he declared the Off-Off-Broadway production of my adaptation of A Journal of the Plague Year to be better than Angels in America; I had to agree).

Miss dOrsays fathers fate was suggested by that of a friends father who in fact was the structural engineer in the building of Columbia Presbyterian Hospital (as it used to be) and whose best friend was so keenly disappointed in Uncle Joe when news came of the Hitler-Stalin pact that he killed himself.

It amuses me to consider that the FBI might have kept Mrs. Rosen under surveillance following her association with Dr. Theremin. After his mysterious departure from the U.S., Theremin spent the rest of his life developing state-of-the-art listening devices for Stalin and his successors, so it might be worth a FOIA request. But I have no reason to suppose her relations with Theremin took place anywhere but within the realm of art, and a wonderful thing about art is its genuine innocence.

When I went to work there in 1970, Caramoor was little known outside of New York classical music circles. Almost 50 years on, its famous! This speaks not only to the soundness of the very personal, very idiosyncratic vision that the Rosens realized, but to capable management since their deaths. Finally I realized that the privilege of having become its teenaged underbutler shortly after Mrs. Rosens death made me part of something greater than myself andvery possibly sole surviving repository of some of its lore. Hence I Remember Caramoor.

It was fun to revel in so many good memories, and satisfying to dredge up more from the fog of the forgotten, but maddening in the writing to try to find a structure that would contain what must inevitably be something of a mishmash; although in the end I think I succeeded.