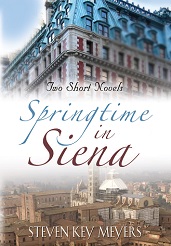 It was my joy to participate in the University of Colorado Italian Department's first study-abroad program long ago, in 1974. We studied that spring in Siena; on my own I stayed in the country the rest of the year. It was a wonderful experience, in many respects just as I describe in Springtime in Siena. But the storys plot is invented. For one thing, my group's leader was a woman who brought along her husband and child. Gary is a combination of academics I have knownwith an admixture of myself, as with all my characters. I prepared for an academic career, but after teaching two English courses promptly jumped ship and never looked back; Garys assertion that teaching is a mugs game is my own. I accept as a flaw of his characterization that it can dawn too late on the reader just how self-regarding a Boomer he is.

Jack shares characteristics of a young man my group met on a field trip to Ravenna, who then accompanied us for some time, and also of my Boulder dorm mate Eric Garber, a memorable character who was one of the first "out" young men I ever knew. Eric kindly used to take me to his film studies classesmy first encounter with Metropolis for sure. We did not stay in touch, and in researching him for this note I was dismayed to learn that he died long ago, having become well known in San Francisco as a gay activist and historian and longtime roommate of Cleve Jones.

Professor Donato is based on my group's real-life Italian professor, exceedingly distinguished and much warmer in personality than as described here; no need to name him, I think, but Ill hint that it was his brother who showed Hitler around Rome. Michael is an invented character of a type one saw in the 1970s, and Briana, Bowling Ball and Katie composite characters. Katies fate was suggested by what I saw in the corner of my eye on coming out of a movie theatre in Perugia one evening: a Fiat 500 bowled into a young woman and tossed her high into the air; she came down on her head. Automotive carnage was a recurring motif of my time in Italy: The father of the family in which one of my classmates lodged was killed in a car crash, and a foreign student we all knew was hit by a car and died. I was fortunate to hitchhike my 10,000 kilometers so safely through Italy, Bavaria and Austria; Im forever grateful to those drivers who picked up me and my friends.

Palermos Capuchin catacombs were as described. From the photographs now online, I can testify that its waresin miraculously good repair when I saw themare not faring well. And the young fisherman at the shore beneath Agrigentos temples? More beautiful than I can say. Henry Kissingers visit to Siena I made up, but strolling in Salzburg one evening I came upon people excited to have seen him get out of his car and go into his hotel moments before. The Paolo and Francesca exchange I overheard years ago at the Pierpont Morgan Library.

I witnessed the first Palio of 1974 standing at a stanchion in the Piazza del Campo, a post I had to defend against others who wanted it (and who had much more right to it than I), but my account owes something to Blood and Sand, Vicente Blasco Ibáñezs 1908 novel, which I read on the recommendation of the now-mayor of Los Angeles, Eric Garcetti, having run into himthen my Silver Lake city councilmanone day at the library.

Writing Springtime in Siena proved unexpectedly harrowing when for the first and thus far only time (knock on wood) I encountered writers block. It exists! I couldnt believe it! I kept noodling for weeks, free writing with no discernable result, until the colossal events of September 2001 dissolved the logjam.

The Man Who Owned New York

I wrote The Man Who Owned New York under delightful circumstances, while staying a winter in my motorhome at Blanco State Park in Blanco, Texas. More of life should be like that! For three months I enjoyed a perfect routine, writing in the morningsand writing easilyand in the afternoons leading my beloved dog, Lady, down the river and back ahead of my three cats, walking single file behind us, a spectacle enjoyed by all who saw it.

The books plot derives from America's longest-running scam, the Edwards Estate. Supposedly this referred to a farm in lower Manhattan made over at the time of the Revolutionary War by its owners, the Edwards family, for temporary safekeeping to Trinity Church, but kept by Trinity ever afterwards. Since at least the Civil War, con men have been busy locating heirs and peddling assistance in reclaiming the family inheritance. Eyes did widen a couple years ago when, in connection with some lawsuit or other, Trinity disclosed the parishs net worth as being in excess of (ahem!) $2 billion. The New York Times published a definitive account of the Edwards Estate and its history of lawsuits and trials on January 1, 1994, p. 10).

Some Texas forebears of mine were told they were the rightful heirs to the Edwards Estate and believed it (Ive spun another story from this family legend in The Last Posse,

published as part of my 2021 book, That's My Story). I enlisted other dispossessed ancestors of mine, from Missouri, as characters in The Man Who Owned New York. They come to New York to reclaim their fortune, only to butt up against the wicked citys machinations, as personified by Father Day and his gleaming, naive young secretary, Father Stackpole, blue-blooded fodder of a type still familiar in the New York of my day for all kinds of sacrificial carnage.

Richie Weis is an invented character, as is his uncle, Abe Weis, but Abes background is inspired by Aaron Copeland's account in his memoirs of his peddler uncle. I knew a man, ancient in the 1980s, who still sighed at the memory of competing with Copeland in 1926 for the favors of a beautiful blond (a competition Copeland won). From the same man came the story of a Columbia mathematics professor who haunted the Met Operas standing room in a split-trousered swallowtail suit that he might do as Father Day does in my story.

This bookwhich delights me beginning to endmay be said to have started the day a friend took me to St. John the Divine and in its behind-the-scenes opulence introduced me to bishop after bishop, canon after canon, and priests galore. That the story came to have a distinctly Catholic flavor surprised meafter seven years of Catholic school, Im no partisanbut its not the writers job to fight what the story wants to be. It did amuse me to impart a little settlement-house activity to it; when I lived in the far East Village in the late 1970s, Christadora House, formerly one of the best-known settlement houses, was shuttered but evocative. The handbells rung at Bishop Days funeral are inspired by those I witnessed in Cardinal Bernardins funeral procession in Chicago in 1996. I gave the job of renovating All Angels Church to Mott B. Schmidt, the distinguished real-life architect whom I met in 1972 when he was building an addition to Caramoor.